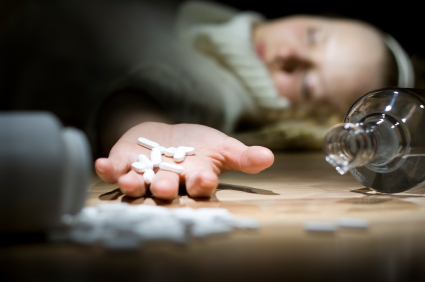 The term drug overdose, or OD, describes the ingestion or application of a drug or other substance in quantities that are excessive. A drug overdose is harmful and can result in death.
A drug overdose occurs when a person's metabolism cannot detoxify the drug fast enough to avoid unintended side effects. Drug overdoses are sometimes caused intentionally to commit suicide or as self-harm, but many drug overdoses are accidental.
Drug overdoses often happen as a result of the use of multiple drugs, such as heroin or pain medications with amphetamines and/or alcohol. Using drugs after a period of abstinence can also induce a drug overdose.
Signs and symptoms of a drug overdose vary, depending on the drug or toxin being used, and the purity and quantity of the drug being used.
Drug overdose with opiate drugs causes sedation (sleepiness), low blood pressure, slowed heart rate, and slowed breathing. Pinpoint pupils, where the black centers of the eyes become smaller than normal, are common in opiate overdose. A serious risk is that the person experiencing the drug overdose will stop breathing. Cocaine and crack cocaine overdoses cause seizures, high blood pressure, increased heart rate, paranoia, and other changes in behavior. Heart attack or stroke are serious risks within three days after cocaine overdose.
While many drug overdose victims recover without long-term effects, there can be serious consequences. Some drug overdoses cause the failure of major organs like the kidneys or liver, or failure of whole systems like the respiratory or circulatory systems. People who survive a drug overdose may need kidney dialysis, kidney or liver transplant, or ongoing care as a result of heart failure, stroke, or coma. Death can occur in almost any drug overdose situation, particularly if treatment does not begin immediately.