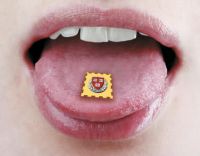 Lysergic acid diethylamide, abbreviated LSD or LSD-25, also known as acid, is a semisynthetic  psychedelic drug. LSD is normally taken orally, with an absorbent blotter paper, a sugar cube, or in gelatin. In its liquid form, LSD can also be administered by intramuscular or intravenous injection. LSD is very potent, with 20–30 µg (micrograms) being the threshold dose.
LSD causes expansion and an altered experience of senses, emotions, memories, time, and awareness for 6 to 14 hours, depending on dosage and tolerance. LSD may temporarily impair the ability to make sensible judgments and understand common dangers, thus making the LSD user more susceptible to accidents and personal injury. LSD use can also cause signs of organic brain damage, impaired memory and attention span, mental confusion or difficulty with abstract thinking.
There are known instances of LSD inducing psychosis in people who appeared to be healthy prior to taking LSD. In most cases, the psychosis-like reaction was of short duration, but in other cases it may be chronic.
Massive LSD overdoses can lead to respiratory arrest, coma, emesis, hyperthermia, autonomic instability, and bleeding disorders.
LSD-induced persistent psychosis can cause distorted and disorganized thoughts, dramatic mood swings, mania, depression, vivid visual disturbances, and hallucinations that persist even after the drug effects have ended. Although rare, these symptoms may last for years.
LSD-related deaths normally result from behavioral toxicity. One reported case involved an user that was killed after attempting to stop a train barehanded. The extreme agitation of a “bad trip” can lead to suicide or unintentional death as a result of fleeing from negative hallucinations.