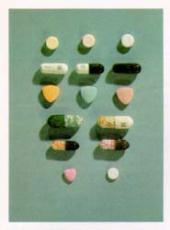 Amphetamines are a class of compounds which are abused in the United States, Australasia, and Europe. Synthetic amphetamine compounds are produced in clandestine laboratories and vary in purity and potency. Amphetamine abuse can also include prescription medications and various over-the-counter diet pills.
Amphetamine is a psychostimulant drug that can produce increased wakefulness and focus, along with decreased fatigue and appetite. Amphetamine is related to drugs such as methamphetamine and lisdexamfetamine, a group of potent drugs that increase levels of dopamine and norepinephrine in the brain, inducing euphoria.
Amphetamine is also used as a performance enhancer. Recreational users of amphetamine use other names for amphetamine, such as speed and crank.
Amphetamine raises cardiac output and blood pressure, making it dangerous for someone with a history of heart disease or hypertension. Amphetamine can cause a life-threatening complication in patients taking MAOI antidepressants.
Amphetamines significantly increase cerebral blood flow, with overall increases of around 30% and can be doubled in local regions of the brain, particularly the left frontal cortex. This activity can lead to haemorrhages and other forms of stroke.
Reviewing 413 methamphetamine-related deaths, ten were caused by subarachnoid and intracranial hemorrhage, strongly associating methamphetamine use with coronary artery disease and with subarachnoid hemorrhage.
Symptoms of an amphetamine overdose include restlessness, tremor, rapid breathing, confusion, hallucinations, panic, aggressiveness, nausea, vomiting, diarrhea, an irregular heartbeat, and seizures. An amphetamine overdose is rarely fatal but can lead to a number of different symptoms, including psychosis, chest pain, and hypertension.