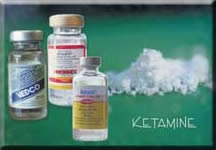 Ketamine, also known as "Special K" or "K" is an anesthetic. Using a small amount of ketamine results in loss of attention span, learning ability, and memory. At higher doses, ketamine can cause delirium, amnesia, high blood pressure, depression, and severe breathing problems. Special K is often used in combination with other drugs, such as Ecstasy, heroin and cocaine.
Ketamine is used as anesthesia for short diagnostic and surgical procedures. Ketamine is also used for anesthesia prior to administration of other general anesthetics. Although ketamine may not cause physical dependence like that seen with morphine, heroin or alcohol, it is associated with a powerful psychological addiction- like that seen with cocaine. Ketamine has the ability to produce intense vivid psychedelic effects, and is frequently abused. The psychedelic effects and out of body experiences created by ketamine use have been primary reasons why the drug is abused.
Ketamine may increase blood pressure and heart rate. Ketamine use has been associated with cardiovascular depression. It can also cause cessation of breathing, cardiac arrest, brain damage and death. At very high doses, ketamine behaves more like other anesthetics and can cause respiratory arrest and increase blood pressure. Deaths with abuse of ketamine alone are rare. The majority of fatalities occur when ketamine is combined with other CNS depressants like alcohol, benzodiazepines and a mixture of other illicit drugs.
Prolonged use of ketamine can result in amnesia, impaired motor function, delirium, and respiratory problems that can be fatal. Ketamine can cause loss of in consciousness, neuroses or other mental clouding.
When injected, ketamine can also cause a significant increase in blood pressure, abnormal heart rhythms, respiratory depression, airway obstruction, visual problems, seizures, skin rash and pain at the injected site.